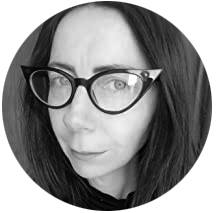 Alexandra Heller-Nicholas has written eight books on cult, horror and exploitation cinema with a particular focus on gender politics, including Rape-Revenge Films: A Critical Study (McFarland, 2011), the Bram Stoker Award-nominated Masks in Horror Cinema: Eyes Without Faces (University of Wales Press, 2019) and, most recently, 1000 Women in Horror: 1895-2018 (BearMedia, 2020). Alexandra is a Research Fellow at RMIT University.

Sarah Lambert’s prophetic, mid-1980s urban thriller, On Guard, presents a gritty, grass-roots feminist vision of how women’s reproductive organs might be monopolised and manipulated by a prospective, Dystopian patriarchy. The past future destinies of our own minds and bodies within our own, local Australian context, is cleverly and grippingly depicted in this low-budget Girls Own Adventure pic, which forms an ironic counterpoint to the other, larger-scale, futuristic blockbusters featured in the Past Futures season. Alexandra Heller-Nicholas’s excellent and comprehensive overview of Lambert’s distinctive ‘femme-flick’ (originally published by Senses of Cinema in July 2017 and republished with permission below) was made possible through the unique resources provided to the author as part of her AFI Research Fellowship. For further information about the Fellowship, contact The AFI Research Collection, housed within the RMIT University Library. — Olympia Barron (Librarian, AFIRC, RMIT)

The slightest spirit of ye olde timey explorer boils within when one ‘discovers’ a movie with little online imprint. Susan Lambert’s 1984 feminist terrorist heist film On Guard is such a curio, and outside a sparse IMDb.com listing and brief archival entries at ACMI, the NFSA and the Swedish lesbian culture website Lesbisk Makt, traces of the film are otherwise thin on the ground.  Considering it received positive feedback when it played at the London Film Festival1  and attained decent press coverage in Australia at the time of its initial release, the contemporary scarcity of information about On Guard seems to stem less from being critically buried than it is related to more practical issues of access. My first viewing was on VHS at the Mediatheque at Melbourne’s Australian Centre for the Moving Image,2 and watching the film felt like an adventure in itself.

Co-written with Sarah Gibson, Lambert’s film follows four Sydney women: Diana (Jan Cornall), Georgia (Mystery Carnage), Amelia (Liddy Clark) and Adrienne (Kerry Dwyer).  They juggle the pressures of work (including nursing and teaching aerobics), home, kids and relationships with their shared mission to sabotage a supercomputer holding ten years’ worth of data at U.T.E.R.O, a multinational biotech company involved in IVF research. Simultaneously making a documentary to send to television stations as a justification of their reasons for the crime, On Guard begins as the conspirators’ nerves fray when one of them loses her detail-laden personal diary.

As Lambert and Gibson quipped to John Hanrahan at Sydney’s The Sun newspaper, On Guard is “The Perils of Pauline meets 1984.”3 Opting for an adventure film after seeing Raiders of the Lost Ark (Steven Spielberg , 1981) and disappointed by the gender politics of the then much-hyped female-centred action television series Charlie’s Angels (1976-1981),4 On Guard was consciously constructed as an action fantasy heist film (indicated nowhere more readily than its subheading, “A Girls’ Own Adventure”). But a promotional pamphlet for the film upon its initial release emphasises that while it plays with familiar genre tropes, it offers “radically new twists”:

Not only are the protagonists politically active women, but the frank depiction of their sexual and emotional lives and the complexity of their domestic responsibilities add new dimensions to the thriller format. The film also raises as a central issue the ethical debate over biotechnology as a potential threat to women and their rights to self-determination. 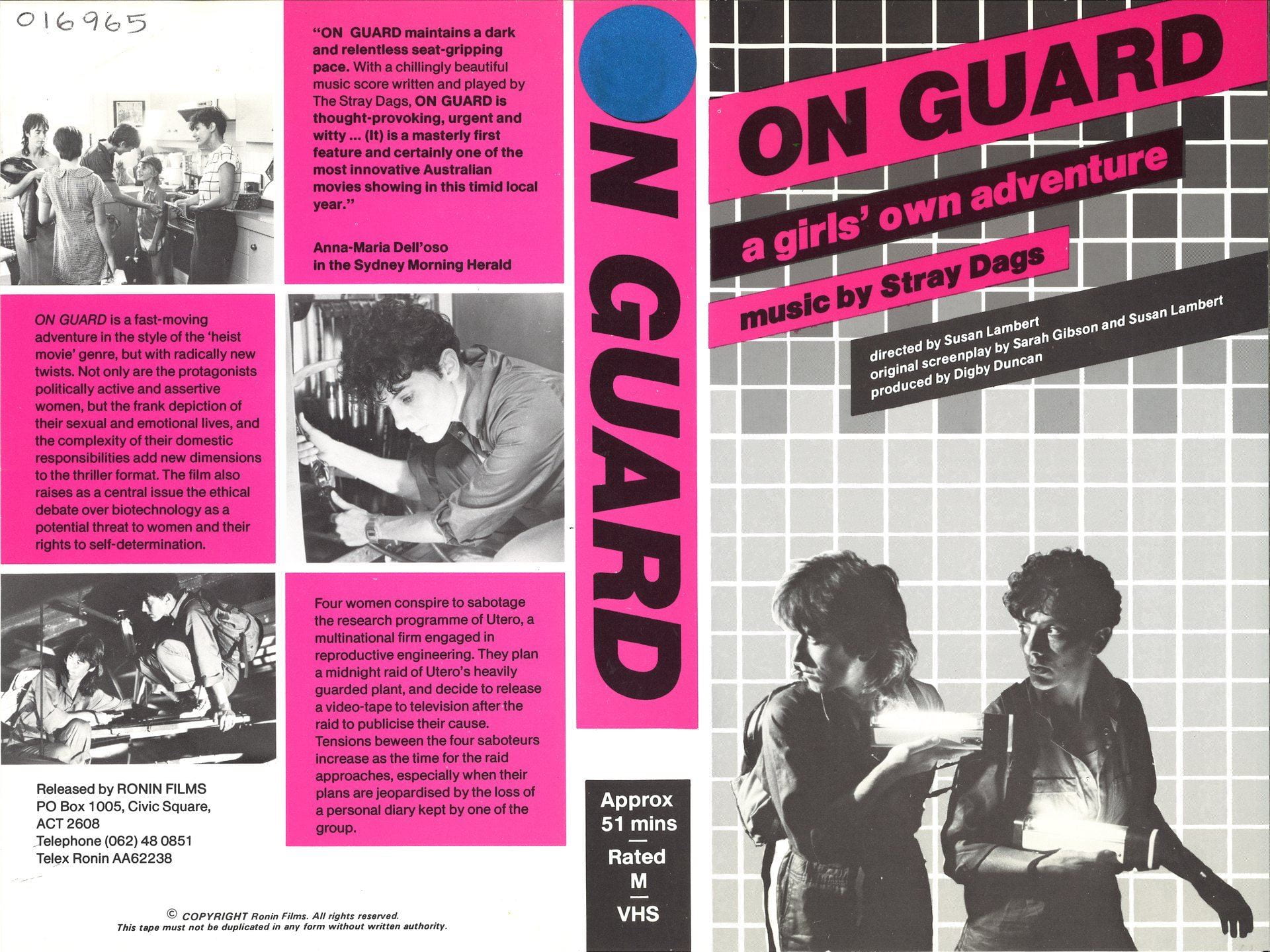 In an interview with Di Lyttleton from Melbourne’s Sunday Observer, Lambert framed the film as a rejection of the tendency where “women are either seen as decoration to the hero or as stupid, running in high heels and falling over”.5 Talking to Cinema Paper’s Victoria Treole, Lambert said that “with On Guard, the area we wanted to look at was women as activists. We wanted women to be seen on the screen as thinking, intelligent and active characters”.6 And On Guard wasn’t just about women in front of the camera: made by an all-woman crew (a first, by one account, for an Australian fictional feature 7), the 27 women involved were joined by the girl group The Stray Dags on soundtrack duties, fronted by the impressively named Mystery Carnage (who also stars in the film). Production company Red Heart was a women-only employer in a conscious effort “to balance the discrimination against women which it says exists in the film industry”.8

Lambert’s feminist awakening struck when she entered university during a period of intense anti-Vietnam War sentiment in Australia, and her activist spirit lead her abroad to briefly work for the iconic British feminist magazine Spare Rib. Her fascination with film and photography grew from here, leading her towards filmmaking.9  Beginning work on the project together in 1979,10 Lambert and Gilbert initially approached the Australian Film Commission with a treatment of an early version of what would become On Guard called Rotten Motives, Twisted Passions. When rejected by the Creative Development Branch, they received funding to develop the script from the Women’s Film Fund:11 the final film ultimately cost around $142,000 to make, and $50,000 of this came through private investment.12

Both Lambert and Gilbert had a background in independent documentary filmmaking, as did the film’s producer, Digby Duncan. The latter directed the 1980 documentary Witches, Faggots, Dykes and Poofters that explores the fallout in the Sydney gay and lesbian community after the 1978 police attacks on the Sydney Mardi Gras. Lambert and Gibson co-directed Size 10 in 1978, and Lambert produced the Gibson-directed docos Age Before Beauty and Behind Closed Doors, both from 1980. With the move to fictional film, On Guard demonstrated the team’s desire to find “new ways to represent women and their concerns in the cinema”, and a simultaneous attempt “to bring women’s issues to a wider audience through the medium of a fast-moving adventure film”.13 Joining this core creative team were other notable names: filmmaker Martha Ansara14 and her daughter Alice appear in the film, and Laurie McInnes15 would act as cinematographer. McInnes’s presence is felt right from the outset, her rendering of the U.T.E.R.O headquarters in particular less reminiscent of Lizzie Borden’s Born in Flames (1983) than Rainer Werner Fassbinder’s World on a Wire (1973).

Similarities in plot alone make Born in Flames an obvious point of reference for On Guard, a parallel that Anna-Maria Dell’Oso at The Sydney Morning Herald noted at the time. But for Dell’Oso, while Lambert’s film “has the fevered, urgent energy of Born in Flames”, what it lacks is Borden’s “single-stranded foisting of warlike masculine expression on an audience that locked Born in Flames in the airless container of Ideology”.  Clearly championing the Australian in-law over Borden’s earlier achievement, for Dell’Oso “On Guard is a radical feminist political thriller that breathes easily with its theories because it is neither so enthralled nor repulsed by the masculine thrusts of revolution, war, guns, control and assertion”.16

“It’s the sort of film that inspires you to sabotage, making you feel like a giant in the face of normally dwarfing issues.”

But if it was fruitful in 1984 to pit On Guard and Born in Flames in a critical competitive death match, that instinct does not remain. Instead, the two films unite more productively as cross-hemispheric variations of an ambient feminist thirst for blood (both literally and symbolically), expressed through and explored via the codes and conventions of traditionally macho film genres. Dell’Oso makes little attempt to disguise her status as a straight-out On Guard fangirl, celebrating it as “a mesmerising and eerie-strange movie, shot in a style which is a cross between a Girls Own Annual comic-book adventure and a security video of a terrorist break-in”17 But on the whole – although sometimes commenting on the lo-fi rawness of its form, direction and performances – critics were generally excited by On Guard and its potential, both ideologically and creatively. “It’s the sort of film that inspires you to sabotage, making you feel like a giant in the face of normally dwarfing issues”, said Sarah Chester at The Age, championing it as “a thriller moving at full tilt.”18

It wasn’t only women critics in Australia who were enthusiastic about On Guard. Evan Williams at the Weekend Australian magazine stated that “On Guard is so dazzlingly unconventional in its blend of styles and moods that I found it difficult to classify and harder still to judge,”19 making sure that its explicit feminist agenda didn’t alienate its potential audience: “One needn’t be an out-and-out feminist to sympathise with its case against the evil possibilities of reproductive engineering”, he wrote. “It’s enough to say that the film can be enjoyed by anyone”.20 Matt White from the Adelaide Advertiser almost begrudgingly admits that On Guard was a “brave effort and deserves to succeed”, despite the dominance of women both in front and behind the camera clearly proving somewhat of a challenge for him. Noticing only one man’s name in the credits (Michael Snelling), old mate White begins his review by trying to look on what he considers the bright side, comforting himself that “to acknowledge a male hand in a film made almost exclusively by females is, I suppose, some sort of achievement for us fellas”.21 Not all male critics were as awkward as White: Dougal McDonald at The Canberra Times praised the “brightness and freshness about the film” and observed that by rejecting the macho bravado typical of this kind of plot, “the result is something completely different from the familiar elements of the genre.”22

Ideological criticisms from the Australian press were rare, most writers – regardless their gender – admiring the film’s focus on the ethics of reproductive rights, a hugely topical subject in mid-80s Australia with access to IVF technology increasing.  British critic Mandy Sereny, however, criticised “the tokenistic representation of the one black woman among the four”,23 an observation clear to her non-Australian eyes, but significantly did not rate a mention in the many, many local reviews I read. What did permeate local criticism, however, was the urgency of public discourse surrounding biotechnological research into human reproduction. In the very week that the earliest reviews of On Guard began appearing in Sydney newspapers, the same pages were shared with stories about a picnic held in Melbourne for 17 “test tube children – the living results of Australia’s in vitro fertilisation program”.24 While Lambert stated frankly that “I don’t really think there are baddies doing this sort of work for evil motives”, on a number of occasions she drew parallels between scientists doing this kind of research with nuclear scientists in the 1950s who “were given funds and prestige without proper thought to where their work might lead to”.25

Almost three decades since it was first released, the business of babies is now par for the course – the financial demands of having a child via IVF is for many today a more immediate concern than the technology and research that facilitates it. On Guard might not exactly be prophetic as such, but its honing in on the politics of reproduction in an Australian context in a film made almost completely by women makes it – on top of its undeniable energy and spirit – a profound cinematic artefact to visit today.