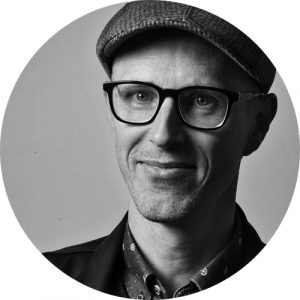 Dr Steve Gaunson is a Senior Lecturer in the School of Media and Communication at RMIT University. His books include The Ned Kelly Films (2013) and American-Australian Cinema: Transnational Connections (2018). He regularly appears as a screen expert on ABC Radio.

Imagine a world of no books. A world where books are outlawed. A world where reading is considered a sinful act and feared by the authorities. To prevent such thinking, a world where the government sends out ‘firemen’ (in bright red firemen trucks) to burn anything containing printed words. This is the premise of American novelist, Ray Bradbury’s 1953 novel, Fahrenheit 451. The title comes from the idea (later proven incorrect) that this is the temperature that book paper ignites.

When Bradbury wrote Fahrenheit 451, book burning was still in the cultural memory of Nazis burning books during World War II, as well as the current moment of McCarthy era communist witch-hunts, resulting in blacklisting and jailing based on the possession of ‘red’ books.

François Truffaut’s 1966 adaptation of Fahrenheit 451 marked a change in direction for him. As his fifth feature film, it was his first non-French language film, his first colour film, his first big-budget film, and his first time shooting outside of France, with a non-French crew. With this in mind, it is not entirely surprising that he had a difficult and unpleasant experience making the movie. For the six months of the shoot at Pinewood Studios in London, he felt no rapport with the English crew (since he spoke only French), and mostly stayed and ate in his hotel room.

Despite Truffaut being bored by science fiction, Bradbury’s novel piqued his interest, particularly the idea that writing would literally ignite into flames. He himself was a bibliophile and avid collector of books, and in the film Truffaut goes to great lengths to burn the writing that had played such a formative and inspirational role in his life. 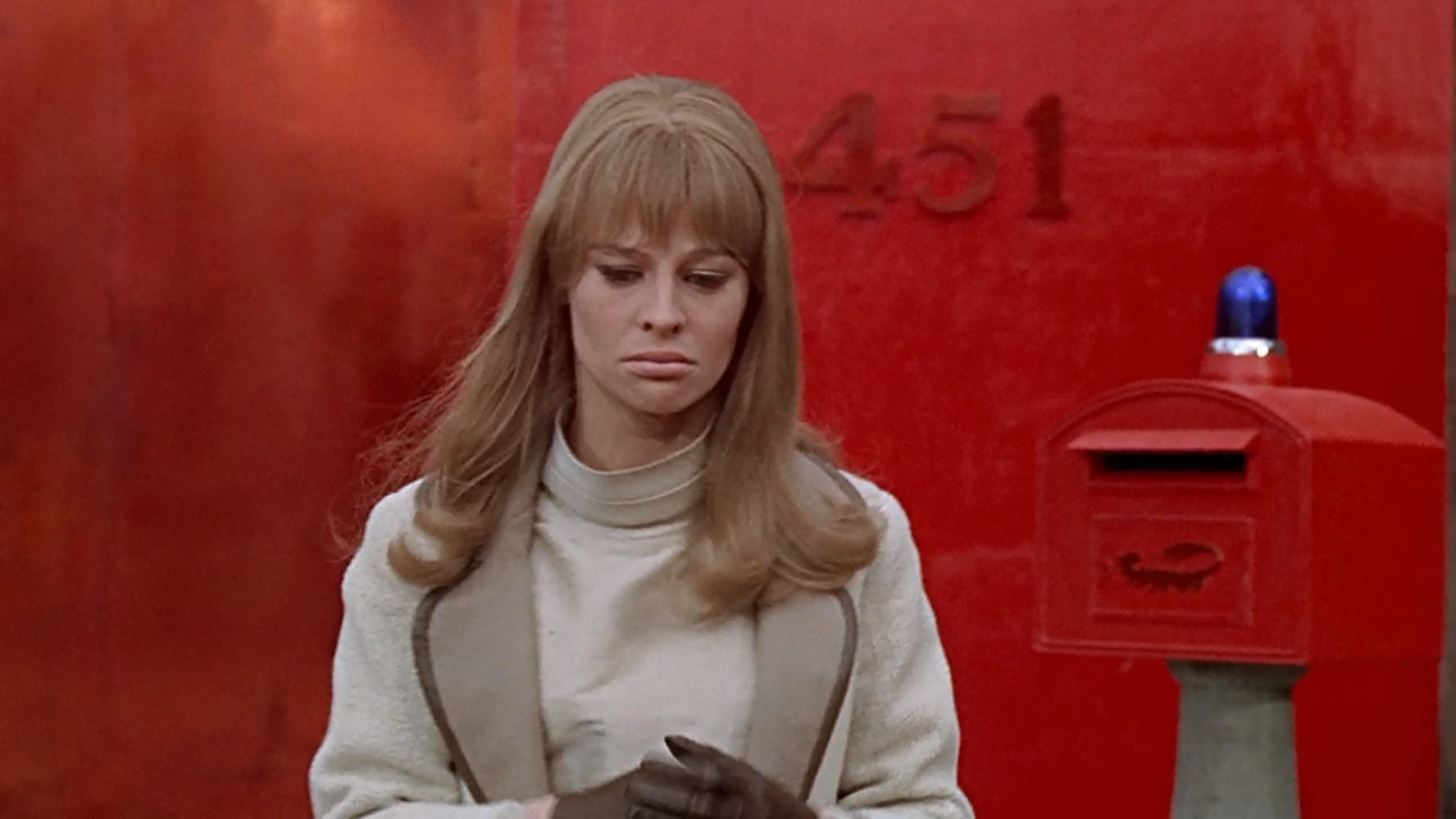 Among the books burned is a Truffaut favourite, Mad Magazine (to his delight the director was immortalised in the 1978 edition), and film journal Cahiers du Cinema for which he was a regular contributor of critical essays. The issue of Cahiers that burns features an image from Breathless (Jean-Luc Godard, 1960), for which Truffaut and Claude Chabrol cowrote the initial script treatment that Godard, after some modifications, would direct.

Truffaut never seemed convinced on his casting. Before deciding on Julie Christie who was given the dual roles of Linda Montag/Clarisse, Jane Fonda was initially offered the roles. Oskar Werner was eventually, and hesitantly, given the role as Guy Montag after the director had considered Marlon Brando, Paul Newman, Montgomery Clift, Peter O’Toole and Terence Stamp. Although it would seem a wise choice to work again with his Jules et Jim (1962) co-star, Werner would become a major reason for Truffaut’s displeasure on the set. The central conflict was on how the performance should be played.

Because it is science fiction, Werner provided a robotic aspect to his character who sniffs and shakes books as if he were in their presence for the first time. Truffaut wanted a gentler and more humane approach to the character and made his loathing of Werner’s choices known to all on the set. In retaliation, Werner cut his hair to deliberately create a continuity problem for Truffaut.  In the final weeks of the shoot, the star and director would only communicate with one another through instructions given to the producer (Lewis M. Allen) who had to play messenger between them. Werner’s performance is simply awful, and Christie is not much better in the dual role, which itself is distracting.

Nevertheless, there are many attributes which deserve praise. Martin Scorsese for starters regularly cites the film as one of his favourite Truffaut movies, and claims it had a major influence on his own work, though to be fair the real influence comes through Nicolas Roeg’s cinematography and the wonderfully arresting use of crimson red, in addition to Bernard Herrmann’s moody score. Scorsese would later seek the services of Herrmann for his score of Taxi Driver (1976), reminiscent to that from Truffaut’s final scene, with a similar use of intercutting between the dialogue and non-diegetic music.

Watching the film today, one must not confuse the ‘firemen’s’ burning of particular texts as Truffaut’s own attempt to ‘cancel’ books with their own muddied controversies. Ironically many of the books destroyed in Fahrenheit 451 have recently been banned from many teaching syllabuses and public libraries: Lolita, the 1955 novel written by Russian-American novelist Vladimir Nabokov about a literature professor under the pseudonym Humbert Humbert, becomes obsessed and sexually involved with his 12-year-old stepdaughter; My Autobiography by Charles Chaplin, a director who at the age of 35 impregnated the 16-year-old Lita Grey and then married her to avoid charges of statutory rape under California Law; Gone with the Wind (Margaret Mitchell, 1936), where racist and white supremacist themes permeate the book; and Mark Twain’s The Adventures of Tom Sawyer (1878) that relies on racial epithets to describe its non-white characters.

“Ironically many of the books destroyed in Fahrenheit 451 have recently been banned from many teaching syllabuses and public libraries.” 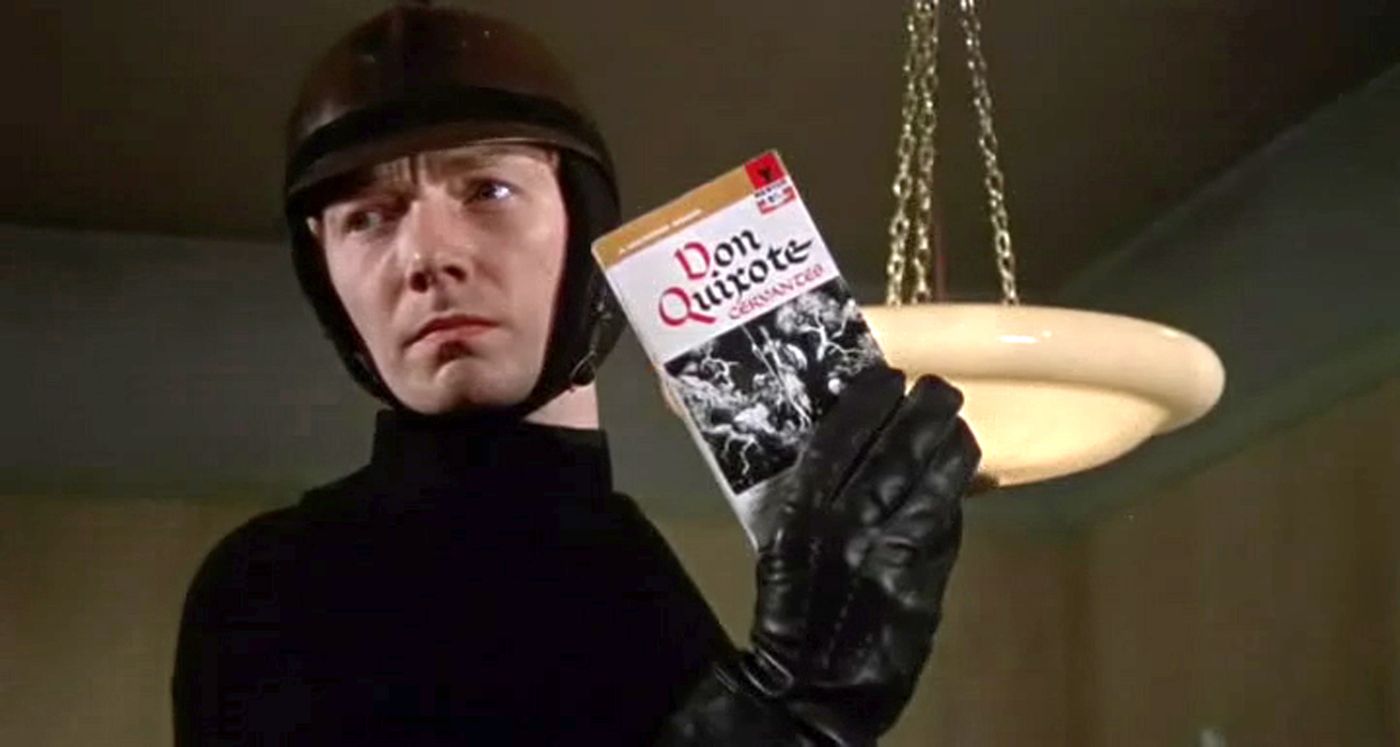 The consideration of issues related to cancel culture become more complicated by watching the film’s destruction of other still cherished and celebrated (and often taught) texts including Alice’s Adventures in Wonderland (Lewis Carroll, 1865), Through the Looking-Glass (Lewis Carroll, 1871), Jane Eyre (Charlotte Brontë, 1847) and Pride and Prejudice (Jane Austen, 1813). A question which has only intensified through the current moment of cancel culture is whether we can condone the destruction of some texts or authors and not others. How does it feel to watch the literal destruction of books through incineration? Where does it end? Such questions are foregrounded by Bradbury’s novel where the constabulary actively hunt out all forms of writing including functional manuals and crosswords.

Truffaut too provides a textless opening credit sequence that is spoken in voice-over rather than written as titles on the screen. Other than writing that appears on the contraband books, there are no written words in this film up until the end credits. The opening titles are read by Alex Scott who plays the leader of the ‘Book People’, a secret group where each member memorises a classic text in order to keep it alive. The idea that a book person reads the credits is a Truffaut cinephile wink to the importance of film credits, giving them an importance in the film to that equal of key literary works.

As an aside, with streaming services today jettisoning credit sequences from both the beginning and ending of movies and programs (with the conclusion of one instantly overlapped by the beginning of something new), one cannot help but feel a sense of nostalgia for the role that Book People play in preserving the names of the creative talent.

Now 55 years after its initial disastrous release, where audiences seemed dulled, and the director made a consorted effort to distance himself from the film, it has grown in respect and stature. Today it remains a favourite choice of science fiction for those who are not generally drawn to the genre. Much of this has to do with it being made by a director who himself did not care all the much for the genre.

Lovers of the book: brace yourself for a degree of reduction. Although the milieu is certainly sci-fi, this is not the register that Truffaut wants it played in. This is why Werner’s intentionally robotic performance seems so tonally off. Most of Bradbury’s futurama aspects are reduced or shown little interest. However, worth noting are the widescreen shaped TVs that share a strong similarity to the current home HDTV.

Despite loving Herrmann’s score and subsequently asking him to adapt his novel into an opera — an idea that Herrmann did consider — Bradbury was reported to have initially loathed Truffaut’s adaptation, though over the years his views became more upbeat. When pushed for a reason, Bradbury would often cite the narrative commentary that Truffaut makes about the home invasion of (television) screens into the domestic space. Bradbury felt that when given the choice between the distraction of screens in the home, to that of deep thinking from literature, the choice would always be the former. It seems that such prescient views and debates are no less vital today.

With thanks to the AFI Research Collection for their assistance with this article.