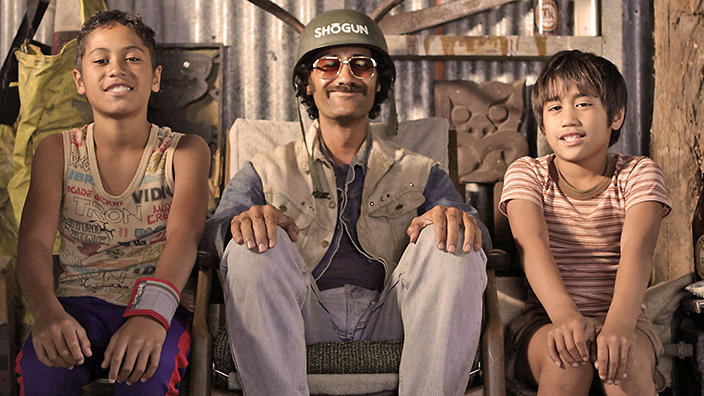 A New Zealand feature film featuring the actors James Rolleston and Taika Waititi, which explores fatherhood and the delusions of parenting.

The realisation that our heroes are flawed creatures and not merely figments of our imagination is something that occurs to all of us at one point or another. This realisation can be described as a loss of innocence – a central theme of Taika Waititi’s 2010 coming-of-age film Boy.

Boy is set in a beautiful, yet undeniably impoverished area of New Zealand in 1984, seen through the eyes of title character, Michael Jackson obsessed 11-year-old, Boy (James Rolleston). Boy lives with his grandmother, several cousins, and his brother, Rocky (Te Aho Aho Eketone-Whitu). In the first few scenes we see his grandmother leave town for a funeral, leaving Boy in charge of the kids. Boy’s mother died while giving birth to Rocky, and despite his wishful thinking that his father, Alamein (Taika Waititi), is away deep-sea diving, he is in fact in prison for armed robbery.

Boy’s charming, yet ultimately selfish and uninterested father, returns in part to see Boy, but mostly to collect buried money. The cracks in their relationship begin to show as it becomes clear that Alamein is not what Boy expected. What becomes apparent is that Waititi’s character is not simply a bad man, he is merely unfit for fatherhood. This nuance is lost on Boy who is understandably disappointed that his father is not the sword-wielding hero of his imagination.

This disappointment can be epitomised with a scene halfway through the film in which Alamein holds a “get together” to celebrate his return home. As he becomes intoxicated and riffs messily with his friends, Boy watches on with a look of disappointment and perhaps disgust. We then see Alamein morph into Michael Jackson and perform a choreographed dance. As Boy is imagining this, a look of pure joy crosses his face. Perhaps Boy would be happier if he had remained oblivious to the reality of his father – with his active imagination and childlike innocence intact.

Boy possesses a unique charisma and personality that draws the viewer in and keeps us captivated. Although witty and heavy on visual humour, the characters possess a sad quality, creating a beautifully nuanced coming-of-age film.