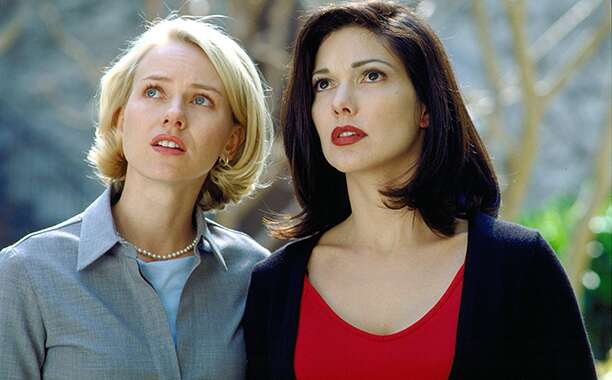 A woman takes refuge in a Los Angeles apartment after she is left with amnesia from a car accident.

After Lynch’s profile grew exponentially with the cult successes of Blue Velvet (1986) and the TV series Twin Peaks (1990), 2001 saw the mind-bending ennui of films like Fight Club (1999) and Donnie Darko (2001) stoke audiences’ appetites for psychological thrillers, in turn creating a fertile environment for the release of Lynch’s next film, Mulholland Drive (2001).

Originally conceived and shot as a TV pilot, the film would be hailed as Lynch’s masterpiece; even giving Roger Ebert pause to reconsider his historically curmudgeonly distaste for the director’s work: “David Lynch has been working toward Mulholland Drive all of his career,” he wrote, “at last his experiment doesn’t shatter the test tubes.”

The film was rejected by network executives in its pilot form and subsequently re-jigged by Lynch as a feature film. Accounting in part for the narrative makeup of the film, Lynch’s Los Angeles is littered with MacGuffins and red herrings. Characters are introduced in scenes that feel crucial, but never show up in the film again. These scenes, originally seeds for arcs planned to play out over a TV season, instead become tone-setting vignettes that effectively underscore the strange, violent and absurd forces at play in Mulholland Drive.

The film begins as a slick LA noir and hits all of Lynch’s favourite beats along the way: Ingmar Berman references? Check. Black coffee? Check. A squeaky-clean exterior whose underbelly teems with abject horror? Check. (There’s an absurdly terrifying creature living behind a Winkie’s Diner, for goodness sake.) By the third act, the goofier elements are jettisoned to shift into full-blown surrealist psychodrama where Lynch mercilessly tightens the mind-screw, deftly conjuring a parallel narrative that blurs the boundaries between wakefulness and dreams.

Anchoring the ever-present sense of dread, are the droning soundtrack of longtime Lynch-collaborator, Angelo Badalamenti, and the spectral steadicam work of Dan Kneece, who provide clear emotional signposts in an environment where they are often needed.