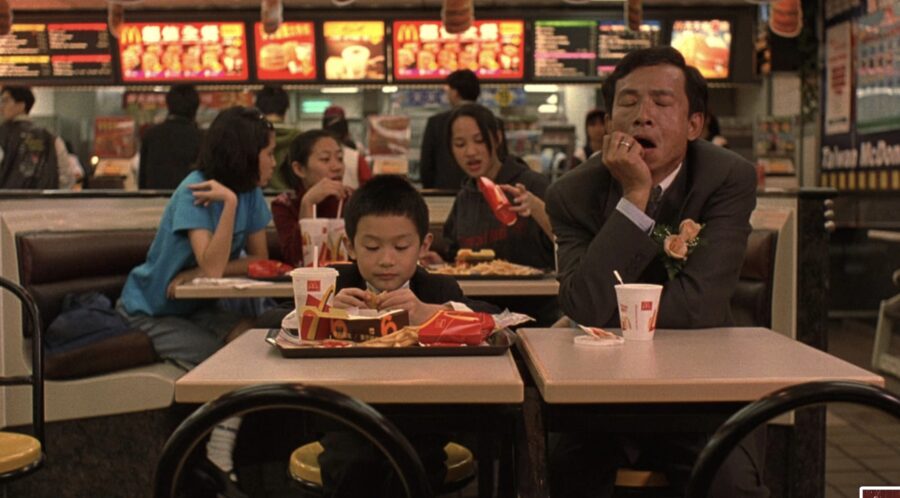 Yi Yi (A One and a Two …) (Edward Yang, 2000) opens with a wedding and ends with a funeral, charting a life spectrum in three hours that is both peaceful and tender. The film follows a middle-class family in the modern city of Taipei; with Yang Yang in primary school, Ting Ting in high school, middle-aged father NG, mother Min Min and grandmother. The multi-narrative storyline follows their familial and social relationships, exploring the reality of family, love, and life.

The director, Edward Yang, graduated with an engineering degree, which gives him a rational and sober mind. He was deeply influenced by André Bazin’s long-take aesthetics. As one of the representatives of the Taiwanese New Wave, he focuses on the city, which is different from Hou Hsiao-Hsien, which focuses on the country. The subject matter offers a critique of contemporary Taiwan, and the spiritual emptiness and loneliness experienced by people living in an urban environment.

In Terrorist, Edward Yang portrays a tragedy arising in an affair driven by a couple’s loneliness in the modern city. In Mahjong, he criticizes Taipei with the characters’ dialogue. In addition to the above styles, Edward Yang has become gentler in his approach, adding thoughts on life and death in Yi Yi, especially acknowledging the Eastern view of reincarnation. As Yang Yang gives a eulogy at her grandmother’s funeral, she says,“When I see my little cousin, who doesn’t have a name yet, it reminds me that you used to tell me that you were old, and I wanted to tell him that I felt old too.” Reincarnation is also reinforced during Ting’s date with her first love. Her date is paralleled with her Dad’s reunion with his first love – with the image on screen showing Ting’s date, played in time with the sound from her dad’s first-love scene.

Yi Yi was shot in 2000, but it was not released in Taiwan until 2017 – ten years after the death of Edward Yang. His last film is the most mature one, and is well deserving of its win for the Grand Prize for Direction at Cannes in 2000.